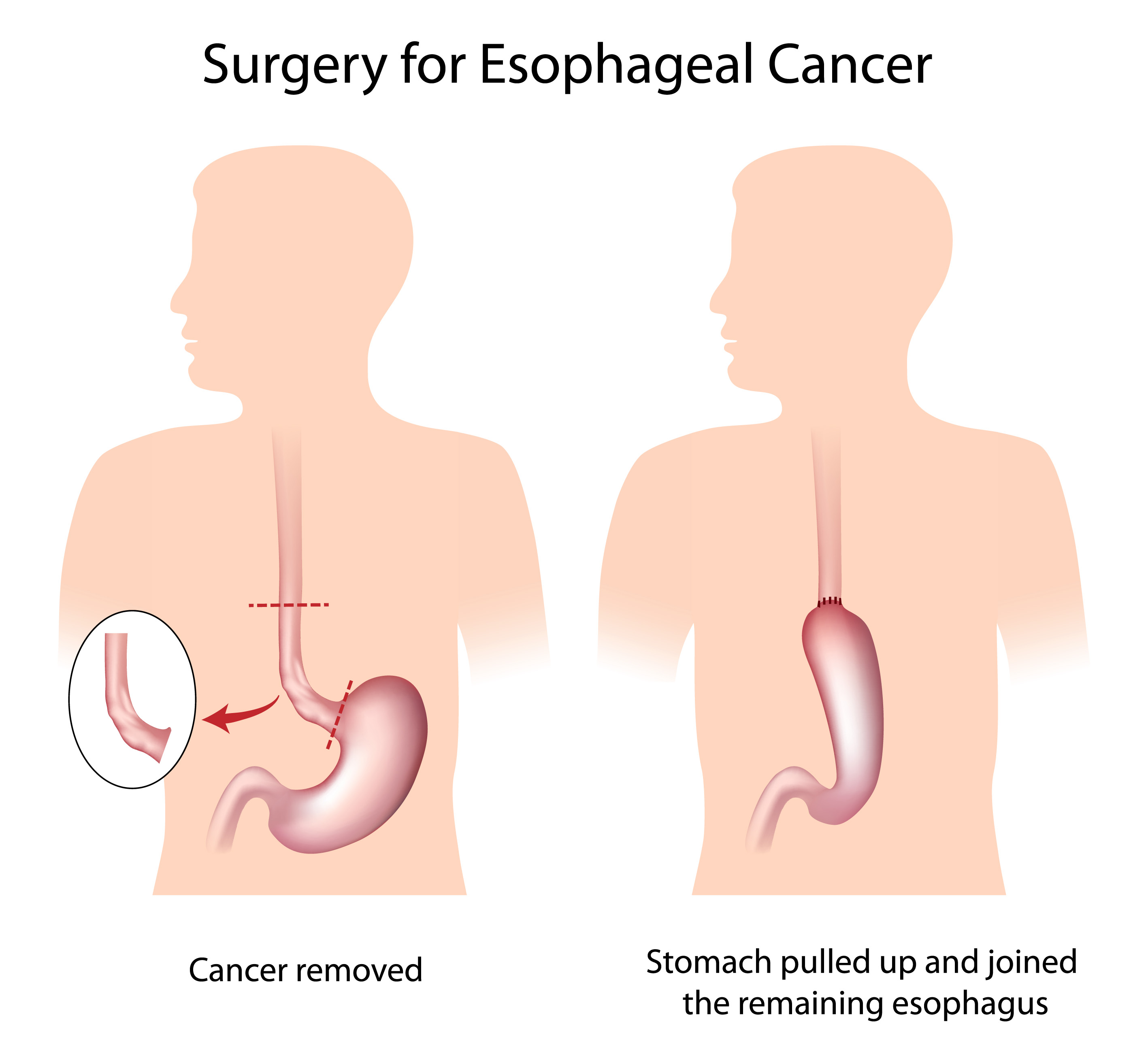 The esophagus is a musculomembranous tube connecting the pharynx to the stomach. It measures approximately 25 cm in length and constitutes the continuation of the pharynx. It communicates with the stomach via the cardioesophageal junction (lower esophageal sphincter), blocking the reflux of food and gastric fluid.

The esophageal mucosa is lined by stratified squamous columnar epithelium contrary to the glandular, single layer columnar epithelium of the stomach.  This histologic texture accounts for the pathologic-anatomic origin of pre-cancer states of the esophageal cancer. Barrett’s esophagus is a particular clinical and anatomical pathology entity where the stratified squamous epithelium is replaced by single layer columnar epithelium consisting of goblet (intestinal) cells. This lesion occurs more frequently at the lower third of the esophagus, is related to esophagitis due to esophageal reflux and is considered a pre-cancer state since it increases the risk for developing adenocarcinoma in the esophagus.  Barrett’s esophagus is a condition with increasing frequency, indicating its relation to the modern lifestyle and the evolution of diagnostic methods.  Its treatment is conservative (medications such as proton pump inhibitors), endoscopic intervention (endoscopic mucosal resection, argon plasma coagulation, techniques using radio waves, phototherapy, cryotherapy, etc), and surgery, in order to prevent the development of adenocarcinoma.

Esophageal cancer is generally considered as an aggressive type of cancer since it infiltrates locally adjacent tissues and metastasizes in nearby lymph nodes as well as via blood circulation. The absence of serosa, contrary to the other organs of the gastrointestinal system, facilitates the local extension of the tumor.

The two more frequent types of esophageal cancer are squamous cell carcinoma and adenocarcinoma. Squamous cell carcinoma was the most frequent type in the past and is associated to factors such as smoking, alcohol consumption, and HPV infection. Currently, the frequency of adenocarcinoma is constantly increasing thus becoming the most frequent type in most case series.  This reflects the importance of an early diagnosis and treatment of gastroesophageal regurgitation and Barrett’s esophagus before the malignant transformation occurs.

It can be treated by surgical resection, chemotherapy, radiotherapy, a combination of these treatments, palliative treatment in case of advanced stage disease (stent placing to prevent occlusion, feeding jejunostomy, support and pain management).

The surgery of choice to treat esophageal cancer is total esophagectomy.  There various forms of procedure, each with strengths and weaknesses. Therefore, there is the option of esophagectomy via thoracotomy, whilst anastomosis (restoration of gastrointestinal continuity) may be performed within the thorax or cervix.  Gastrointestinal tract continuity is usually restored by the creation of a gastric tube and the large and/or the small intestine may also be used, if possible.

Esophagectomy without thoracotomy offers the advantage of cervical anastomosis and involves fewer complications that are easier to manage.  This procedure is comprised of two stages, the abdominal stage and the cervical stage.