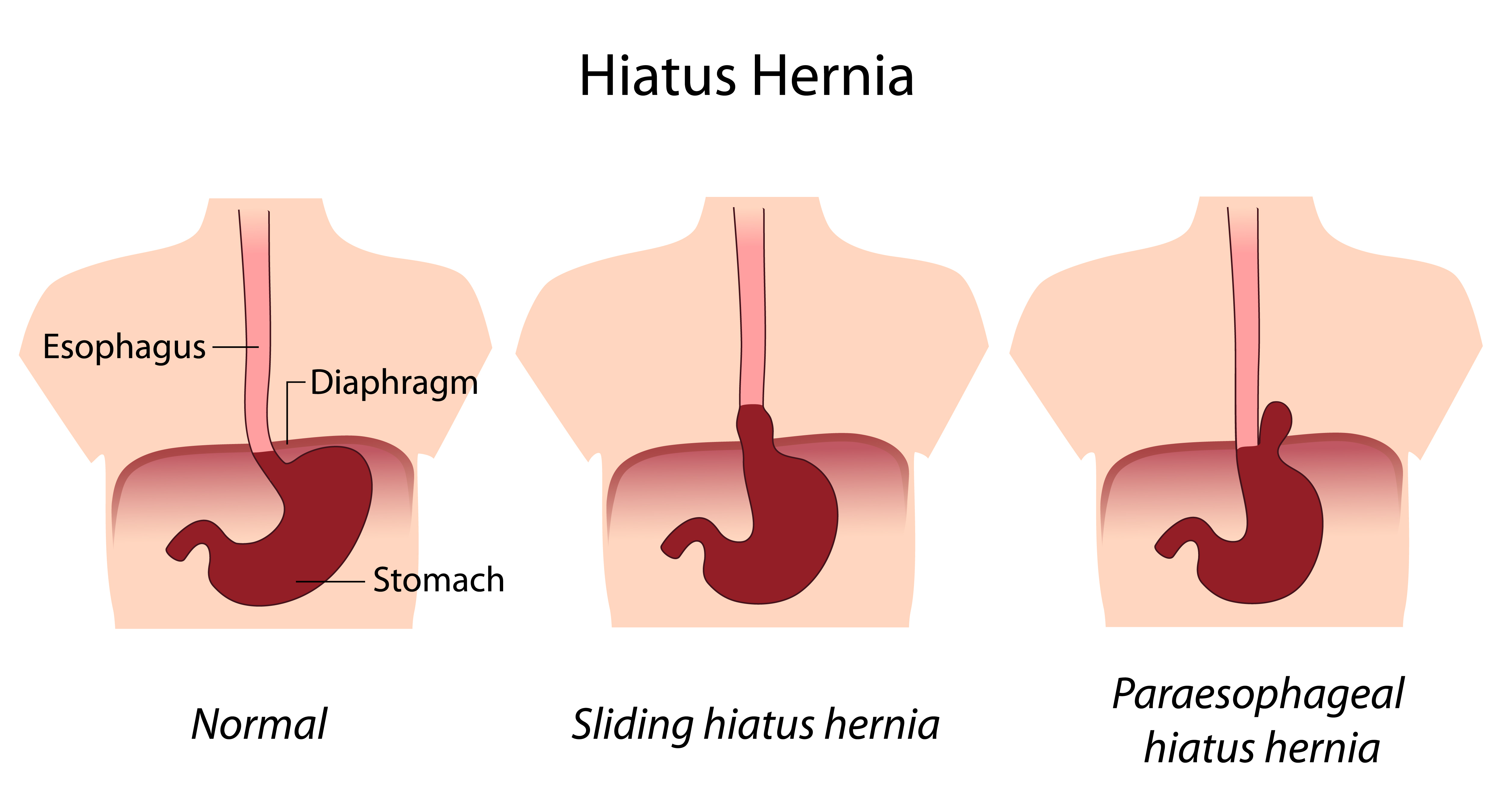 It is an anatomical deformity where the natural opening of the diaphragm through which the esophagus passes (esophageal hiatus) is enlarged. The diaphragm is a powerful dome-shaped structure of muscle and fibrous tissue separating the thoracic cavity from the abdominal cavity. Apart from protecting the intra-abdominal organs and the large vessels, it plays a decisive part in the respiratory function since it constitutes the most important respiratory muscle.

The main types of diaphragmatic hernia are sliding, paraesophageal, and mixed.

Sliding hernias are the commonest type of hernia. When a hiatal sliding hernia is present, the upper part of the stomach slides up (moves up) into the thorax.

The paraesophageal hernia is the second most frequent hernia.  When this type of hernia is present, the upper section of the esophagus moves up into the thoracic cavity parallel to the esophagus, thus creating a pouch.  If not treated properly, it may cause serious damage to the apex of the stomach.

The mixed hernia presents with characteristics of both the sliding and the paraesophageal hernia.

Its clinical image varies.  The patient may be asymptomatic (especially at the early stages) or experience dyspepsia, retrosternal pain or heartburn, feeling of being bloated (flatulence), hiccups, chest discomfort, reflux, eructation, nausea, vomiting.

Most of the time, diaphragmatic hernia should be treated surgically.  Conservative treatment is only recommended for early stages while surgical treatment offers a definitive cure.  Laparoscopic treatment has been established as the treatment of choice at most clinics. The surgical procedure of choice is laparoscopic Nissen fundoplication. It includes retraction, closure and convergence of the crura, as well as safe repositioning of the stomach fundus within the abdominal cavity below the diaphragm. It is followed by the creation of a “valve” from the stomach fundus that is wrapped around the esophagus (360ο). Thus, in addition to the retraction of the diaphragmatic hernia, an antireflux effect is also achieved. Alternative fundoplication procedures are Toupet and Dor procedures (partial wrap and fixation of the stomach fundus).

The laparoscopic approach when treating the diaphragmatic hernia has been established in everyday practice due to its association with low complication rates, faster recovery, and better long term results.