Spleen is the largest lymphoid organ of the body. It is located on the left side of the abdomen, between the 9th and the 12th rib.  It normally works as a filter cleaning the blood from its cellular components, as a reserve of white cells and platelets and it also plays a role in the body’s defense, ferrum metabolism and hemopoiesis in fetal life.  However, it is an abdominal organ sensitive to injury, both due to trauma and during surgery. Laparoscopic splenectomy is the procedure of choice in many hematologic and other conditions including idiopathic thrombopenic purpura, thrombotic thrombopenic purpura, sickle cell anemia, thalassemia, myeloid metaplasia, hereditary spherocytosis autoimmune hemolytic anemia, spleen neoplasms, trauma, lymphomas (Hodgkin and non-Hodgkin), hairy cell anemia, melanoma, metastatic carcinoma, sarcoidosis, Gaucher disease, Felty syndrome, splenic artery aneurysm, infarcts, spleen cysts or abscesses, secondary hypersplenism, or pyruvate kinase deficiency.  The indication and decision for surgical intervention is performed by a therapeutic team where the hematologist usually plays a leading role.  The traditional method of open splenectomy for hematologic conditions is nearly abandoned. 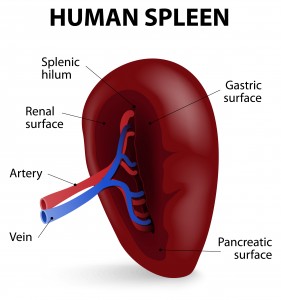 Typical contraindications for laparoscopic approach such as adhesions or the very large size of the spleen seem to be currently overcome and procedures are now completed laparoscopically.

Trauma is no longer a contraindication, mainly for hemodynamically stable patients.  Diagnostic laparoscopy has an important place in the treatment of patients with multiple traumas and, provided that the patient’s general condition allows it, any surgical procedure may be completed laparoscopically.  However, the surgeon needs to be familiar both with trauma surgery and laparoscopic surgery, since it is a field with low visibility in case of hemorrhage since a number of skills is required (splenorrhaphy, etc.) which present a significant learning curve.

The laparoscopic technique involves the instilling of air into the peritoneal cavity via small incisions, the mobilization of the spleen from its ligaments, the ligation of the splenic artery and vein, and the removal of the preparation placed in a special sac. The surgical procedure time is usually longer than in open splenectomy. The laparoscopic approach offers, however, significant advantages e.g. lower loss of blood, better identification of anatomical elements and the tail of the pancreas, faster patient discharge and return to their daily activities, less postoperative pain and fewer postoperative complications.  Preemptive vaccination to enhance the body’s defense is identical as in the case of splenectomy.

In some selected patients’ cases it is possible to perform laparoscopic partial splenectomy while it is a challenge for the surgeon to perform a single – incision splenectomy. 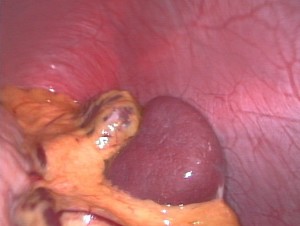