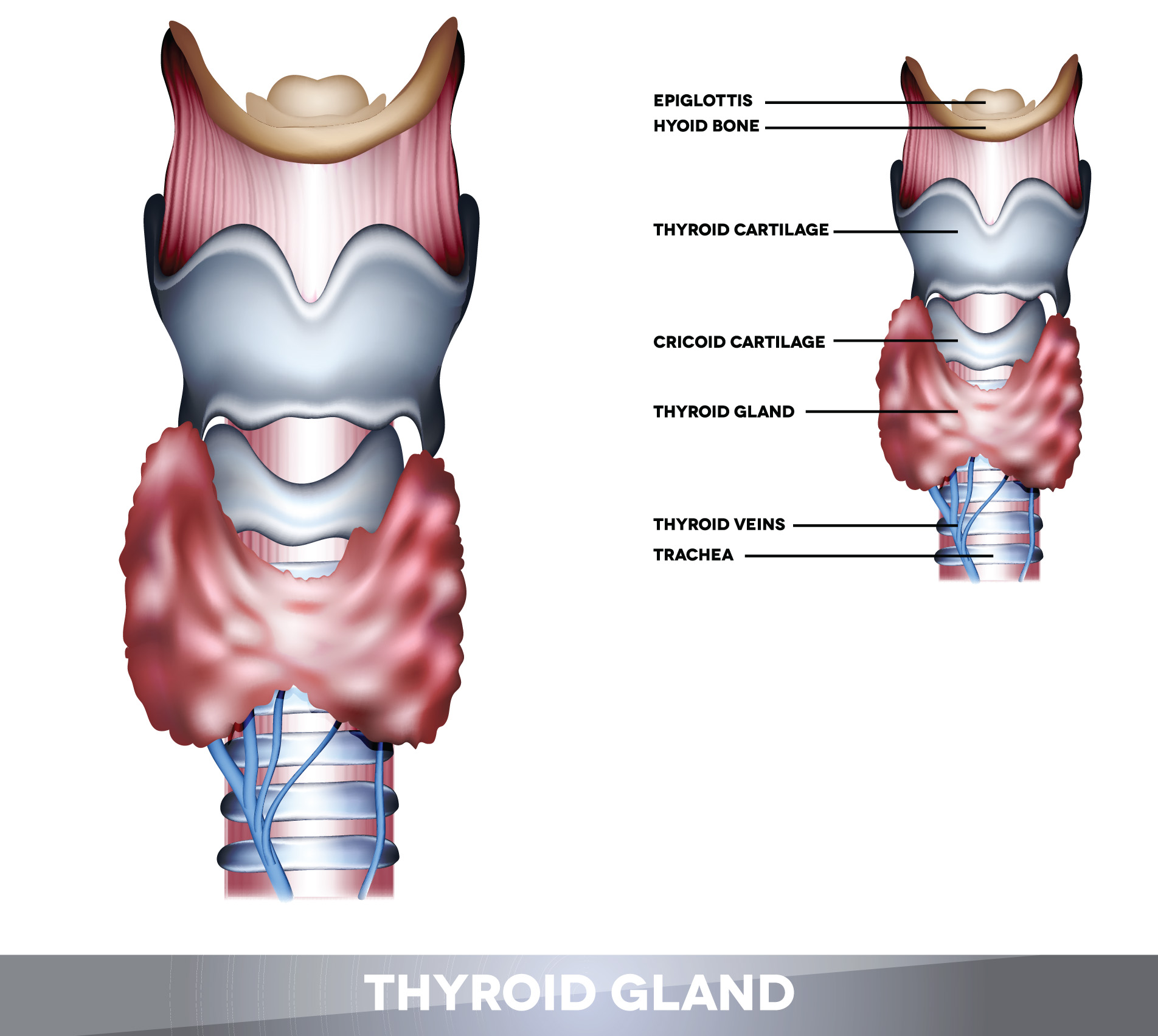 The thyroid gland is the largest gland of the human body. It is situated in the anterior side of the body, weighs approximately 20 grams, and consists of two lobes (right and left) connected by the isthmus. Occasionally, certain people have a third lobe, the pyramidal lobe. Its name arises from its shield-like shape (θυρεός = shield).

It lies around the trachea and the cricoid cartilage of the larynx, situated near vital structures such as the lower recurrent laryngeal nerves (innervating the vocal cords and being involved in voice production), the upper laryngeal nerves, the cervical sympathetic trunk and the parathyroid glands involved in calcium homeostasis. These elements should be recognized and preserved during thyroidectomy.

The thyroid gland is vascularized through the upper and lower thyroid artery and thyroid veins (superior, middle and inferior ones) forming a rich venous network.

The thyroid gland produces three hormones: 1) Thyroxine or (Τ4), and 2) triidothyronine or (Τ3) regulating the metabolism of all tissues, and 3) calcitonin that lowers the levels of calcium in the blood. The synthesis and secretion of thyroid hormones is regulated by thyroid stimulating hormone (TSH) produced by the anterior pituitary, which itself is regulated by thyrotropin-releasing hormone (TRH) produced by the hypothalamus. Iodine is necessary for the output of thyroid hormones.

The conditions affecting the thyroid gland are numerous and are distinguished into:

A significant clinical finding is thyroid enlargement which can be either viewed or palpated while the patient performs swallowing movements. Thyroid enlargement, regardless of its cause, is called goitre.

Other symptoms are related to the occurrence of hypothyroidism (hypersensitivity to cold, dry skin, itching, disorders of menstruation, depression, etc.) or hyperthyroidism (sudden and unexplained weight loss, tachycardia, arrhythmia or palpitations, increased appetite, nervousness, stress, irritability, tremors in the hands, sweating, cycle changes in women, heat intolerance, diarrhea, thyroid enlargement, fatigue, muscle fatigue, speech difficulties, thinning of the skin, hair fragility). The clinical endocrinologist’s contribution is essential for documenting diagnosis and for planning treatment. The expert radiodiagnostician – ultrasonologist, the oncologist, the pathologist and the nuclear medicine specialist are the indispensable members of the medical team treating endocrine gland conditions and, specifically conditions of the thyroid.

Thyroid conditions that need to be treated surgically are the various types of goitre and thyroid cancer.

Any enlargement of the thyroid gland is usually called goitre. Goitres are classified according to the nature of the enlargement and the thyroid functional state. Therefore, there are the non-toxic goiters (simple, uninodular, multinodular) and toxic ones (diffuse Graves disease, toxic multinodular, toxic nodule – adenoma).

Thyroid cancer is a disease with increasing incidence reflecting the environmental impact on the carcinogenesis and the improvement of diagnostic methods in recent years. It is the most frequent cancer of the endocrine system and the most frequently occurring cancer in women (women/men ratio: 2-3:1). It affects all ages, but mostly patients aged between 16 and 45 years.

Papillary carcinoma is the most common form (70%), it is a slow-growing cancer with the best clinical course. Total (or nearly total) thyroidectomy is the surgery of choice. In case of lymph node metastasis, central lymph node curettage is indicated. Their prognosis is good and mortality following thyroidectomy is lower than 1%.

Follicular carcinomas (20%) have generally a worse prognosis than papillary carcinoma because they may develop remote metastases. Total thyroidectomy is the procedure of choice.

Medullary carcinomas (5%) are a particular form of cancer originating from parafollicular cells (C cells) and produce special hormones (calcitonin). It may occur in the context of the Multiple Endocrine Neoplasia-MEN syndrome. Total thyroidectomy and ipsilateral cervical lymph node curettage is the procedure of choice.

Non-differentiated or anaplastic carcinoma (5%) affects older ages with an especially malignant behavior, rapidly spreading to adjacent tissues. Its treatment includes a combination of surgical procedure (with a limited part), chemotherapy, and radiation.

Postoperatively, in cases of patients with extrathyroid extension, extensive lymph node metastasis, highly malignant histology, or remote metastases radioactive iodine and adjuvant therapy may be administered and need to be followed-up regularly.

Thyroidectomy is performed via a small transversal cervical incision of nearly 4 cm. The muscles of the anterior neck surface are carefully prepared, the thyroid gland is identified, the middle thyroid vein is ligated and, subsequently the superior and inferior thyroid vessels. The recurrent laryngeal nerves are identified and preserved. These are involved in voice preservation (a neurostimulator, a high sensitivity and accuracy device is often used to accurately locate and record the electrical activity of the nerves). Parathyroid glands are identified and preserved to avoid postoperative hypocalcemia while the upper and lower pole, the isthmus and subsequently the contralateral lobe are divided.  Muscles are closed and the skin sutured with intradermal or simple sutures using a thorough technique to achieve optimal results.

Possible complications following thyroidectomy: Hemorrhage – hematoma, laryngeal nerve paresis or paralysis, hypoparathyroidism-hypocalcemia, thyrotoxic seizure (rare). These complications are rare, however, the surgeon has to be extremely cautious and careful to avoid them.

The first endoscopic procedures in the neck were video-assisted parathyroidectomies related to small benign masses (adenomas). This method was then extended to the removal of small thyroid nodules after being slightly modified. The technique currently used does not include the instilling of CO2, and the creation of an appropriate surgical field by applying external fixation. This method is not indicated for all patients (15% of patients only are eligible).

This technique includes putting the patient in a supine position without hyperextension of the head to create the adequate area of work. A horizontal incision of 1.5cm is performed at a distance of 2cm over the sterna notch. Preparation and access are the same as in open surgery until access to the thyroid gland. Subsequently, a 30ο endoscopic camera is inserted via an incision of 5-7mm in diameter initiating the endoscopic stage of the method. Small endoscopic tools of 2mm in diameter (forceps, scissors, etc.) are used for the preparation of elements and for completing the thyroidectomy. The surgical procedure times are similar to open surgery and it is possible to use dedicated devices and ultrasonic scissors (e.g. harmonic scalpel).  Esthetic results are excellent and postoperative pain is minimal. In the case of a locally advanced disease or lymph node metastasis, conversion of laparoscopic to open surgery is necessary. According to recently published data in relation to the use of MIVAT to manage low risk papillary carcinomas, survival and relapse rates are similar compared to conventional thyroidectomy. It is, however, a method with a long learning curve requiring extensive surgical experience.