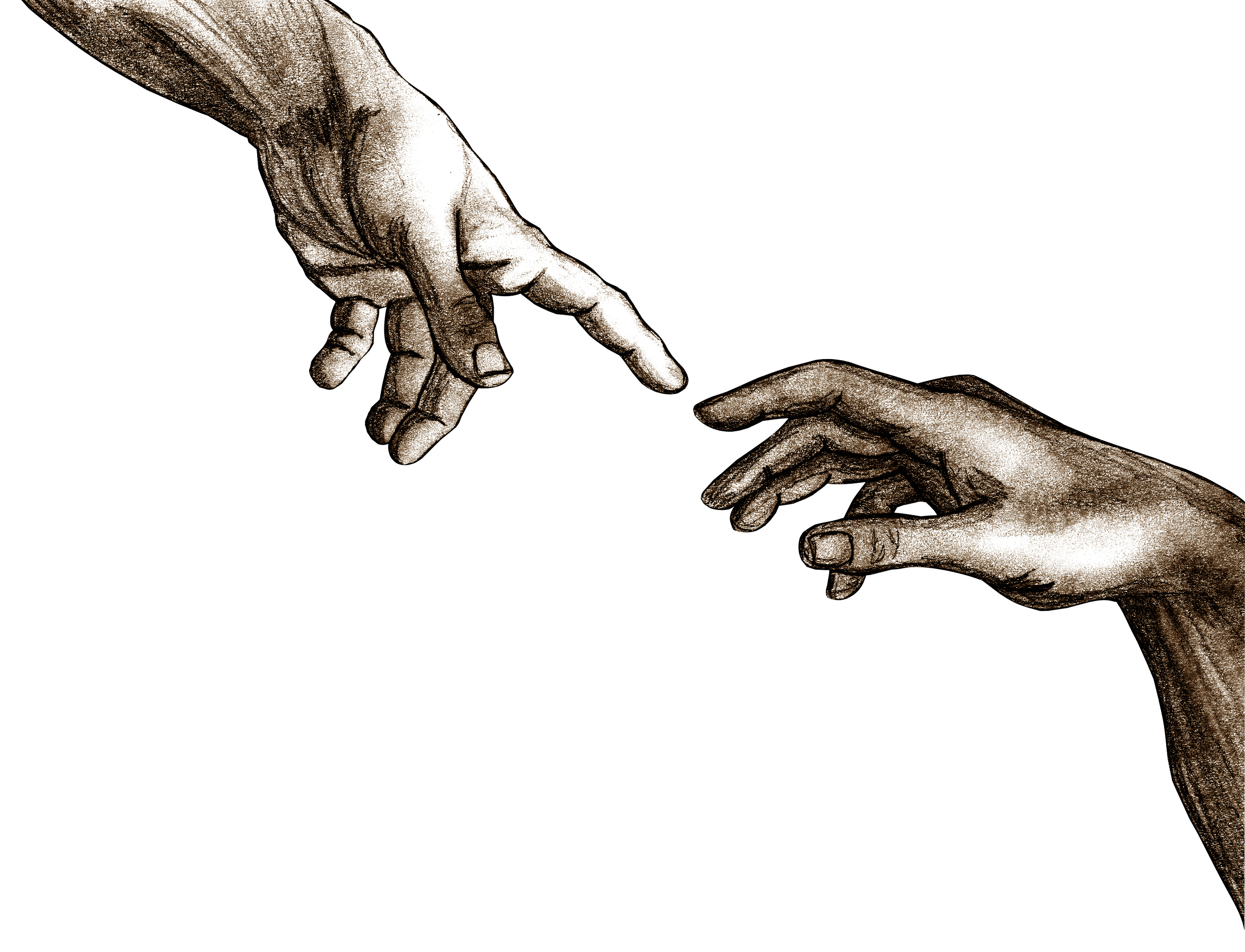 The kidney is an organ of vital importance filtering the blood and removing toxins and waste products that are later eliminated in the urine. It also maintains the water and electrolytes balance in the body; regulates blood pH (that is called the acid-base balance) and produces a hormone called erythropoietin contributing to hemopoiesis.

The irreversible impairment of the renal function results in renal failure, a serious condition requiring special management and treatment by specialized nephrologists. End-stage kidney failure is treated with hemodialysis or, if a suitable and compatible donor is found, with renal transplant. 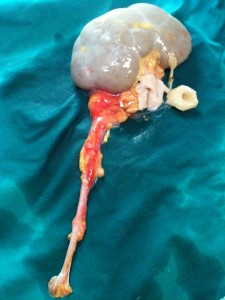 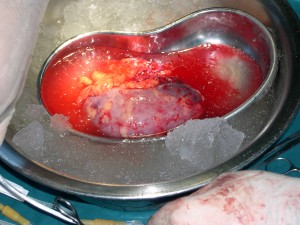 Nearly all end-stage renal patients are candidates for renal transplantation. Exceptions to that are cases with active malignant neoplasm or a septic condition due to the aggravation caused by the administration of immunosupressive therapy. Uremic encephalopathy is also a relative contraindication. Renal failure causes that are also renal transplant indications are cited below in descending order of frequency.

Laparoscopic nephrectomy for kidney transplant has been established as a mainstream procedure both in Europe and the US because it allows donors to resume their daily activities very quickly.

In 2015 we performed the first laparoscopic living donor kidney transplant in a male patient following laparotomy. This 68-year-old patient had previously undergone surgery due to a car accident. Two 5mm trocars and one 10mm trocar were placed on the left midclavicular line, from the costal arch towards the anterior superior iliac spine and, a 10 mm trocar has been placed in the suprapubic area, which was replaced by a gelport for transplant removal.

The graft was immediately placed and the recipient had immediate diuresis with beginning of the renal function.

The longstanding experience in organ transplantation, the latest laparoscopic techniques and the availability of state of the art facilities, such as cutting edge and fully equipped operating rooms have paved the way for the large scale application of laparoscopic nephrectomy protocols for living organ donors in Greece. The advantages presented by laparoscopic surgery are optimally applied on organ donors (kidney patient relatives), who, being healthy, make the ultimate gift of life donating an organ to save the life and improve the quality of life of other human beings. Postoperative pain is minimized, aesthetic results are excellent and donors rapidly resume their everyday activities.

LAPAROSCOPIC NEPHRECTOMY FOR TRANSPLANTATION IN LIVING DONOR WITH PRIOR LAPAROTOMY

The liver is a vital intra-abdominal organ necessary for life. It is considered as “the biochemical factory” of the body as it accounts for a number of metabolic functions such as toxic substance removal from the body (detoxication), plasma protein synthesis, hormonal output and production of substances necessary for digestion, glucose metabolism (glycogenolysis, glucogenesis), glucagon storage, lipid metabolism (cholesterol and trigyceride synthesis), erythrocyte destruction, etc. It is located in the upper right part of the abdomen. The liver has a dual blood supply, from the portal vein and the hepatic artery. The portal vein, accounting for almost 74% of blood supply to the liver, transports venous blood from the gastrointestinal tract. The remaining 25% of blood supply to the liver comes from the hepatic artery, bringing arterial blood to the liver. The blood is then transported via the sinusoidal capillaries from the hepatic lobules to the hepatic venous network ending up to e hepatic veins and finally to the inferior vena cava. Hepatocytes produce bile, which is then collected within the biliary tubules forming the biliary ducts (cholangia). Intrahepatic bile ducts end into the extrahepatic ducts that form the left hepatic duct and eventually the common bile duct. The bile duct is situated on the river bed and contains bile that is secreted via the cystic duct into the common bile duct and finally into the duodenum and the remainder of the gastrointestinal tract.

There are various techniques to enhance liver function. Liver transplant is often the solution to end-stage non reversible liver damage. 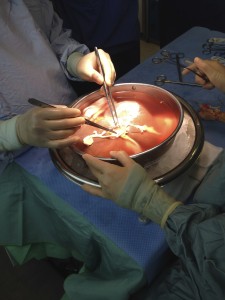 The indications for liver transplantation are the following:

With regard to patients with malignant liver disease, the widely acceptable Milan criteria consider the following patients as eligible for liver transplantation:

a) patients with a solitary tumour measuring <5cm.

b) patients with two or three tumours < 3cm each.

Specific criteria have been described with regard to the appropriate time to perform the transplant. Generally, the liver transplantation is considered imperative when:

a) The estimated survival due to hepatic failure is <1 year.

b) The quality of life due to liver disease is not acceptable.

Liver transplantation is classified as orthotopic (which is the most frequent one) and ectopic – auxiliary and atopic (orthotopic auxiliary).

In orthotopic liver transplantation the affected liver is removed and a new liver graft is placed. It is a method initially described by Starzl (1963) and has currently prevailed in most transplantation centres.

Successful transplantation is based on the right selection of the donor and the recipient based on strictly defined criteria. Usually, the liver graft is taken from a cadaveric donor using a specific technique (hot or cold preparation) and the preservation is performed using ice and special solutions. The organ is prepared in the operation room on the back table.

The orthotopic transplantation technique involves the dissection of the liver ligaments, the preparation of the hila, the preparation and ligation of the bile duct and the hepatic artery, portal vein preparation and venovenous shunt, inferior vena cava exclusion in the subhepatic and suprahepatic space, and removal of the diseased liver. Subsequently, the graft and shunts are placed (suprahepatic and subhepatic shunt of the inferior vena cava, portal vein shunt, reperfusion, hepatic artery shunt, common bile duct shunt).

Post operative follow-up is intensive and aims at supporting the patient and the liver transplant functioning and at preventing rejection through the administration of immunosuppressive drugs.

Liver transplantation is applied at specialized and appropriately certified centers, having the necessary equipment and surgical team experience, and requires the collaboration of a number of specialties and qualified personnel.

The pancreas is a gland of the digestive tract producing and secreting the pancreatic juice containing enzymes important for the digestive function (exocrine function) and many hormones, the most important of which are insulin and glucagon (endocrine function).  Pancreas plays an important role in regulating the glucose levels in the blood and in diabetes mellitus pathogenesis.

This transplant treats the diabetes clinical syndrome and the patient is freed from using insulin. Postoperatively an immunosuppressive drug regimen is administered to prevent transplant rejection. This medication is necessary in any case for the survival of the renal transplant.

Another option is to transplant pancreatic islets (Langerhans islets). This technique includes the removal of the pancreas from the donor, the exclusion and special processing of the islets and their injection to the recipient’s portal vein. This method is less invasive but it is not widely applied since, despite raising high hopes initially, there are studies that show that with time the islets functionality gradually declines. More studies are required to document the efficacy of this method.